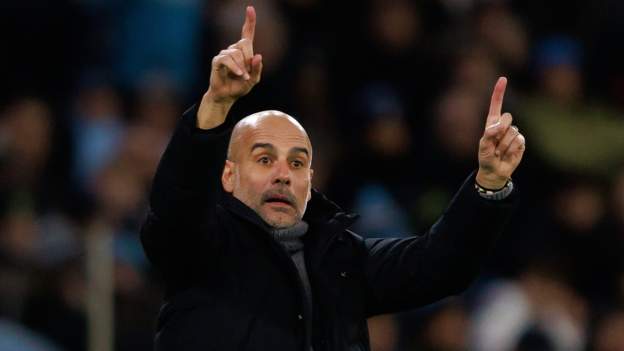 Manchester City manager Pep Guardiola says he has a “ridiculous” idea of ​​how to beat Manchester United in Saturday’s derby clash at Old Trafford.

City are in second place in the Premier League, four points behind their fourth-placed old rivals.

Guardiola has won nine, lost six of the 17 meetings with United since replacing Manuel Pellegrini in 2016.

The Spaniard has been ahead of the Red Devils in all six seasons he has been in charge at City.

Erik ten Hag is the fourth different United manager he has faced in that time. Guardiola has beaten them all, most recently the Dutchman, Ma 6-3 win at the Etihad Stadium in October.

However, United have since dropped just seven points from 10 Premier League games and won their last four, their best run since March 2021.

That means Guardiola will be cautious with the City side who play Southampton in the EFL Cup on Wednesday.

The idea of ​​Guardiola coming up with something “ridiculous” covers all sorts of ideas, which, if implemented, feed the narrative that he has played some high-profile games, sometimes to the detriment of his own team.

The most obvious example was the 2020 Champions League quarter-finals, when City were overwhelming favorites to beat Lyon in a one-off game, only to lose after Guardiola switched to a 3-5-2 formation to counter the momentum of a side. who beat the Blues in the group stage of the competition.

Guardiola was asked during City’s Champions League quarter-final first leg against Atletico Madrid last April, which they went on to win.

The response at the time was sarcastic: “I think too much. I like to think again and create stupid strategies. Tonight I will create an inspiration and make incredible strategies. We play with 12.”

Guardiola did not elaborate on his thoughts for Saturday’s game against United, although he noted his players were tired in training after last week’s Premier League win at Chelsea.

“I don’t have a clear lineup against United,” he said. “I haven’t watched their last game. I have to see how they play at home and if they change anything.”