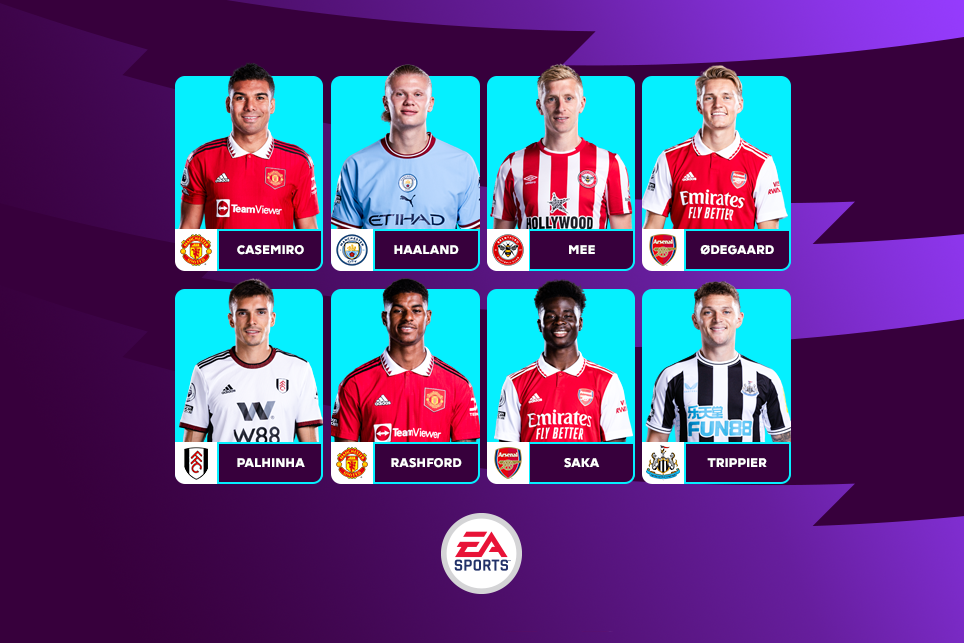 Eight players have been shortlisted for the EA SPORTS Player of the Month award after producing outstanding performances across November and December.

You can help choose who wins by voting for your favourite player via the EA SPORTS website before 12:00 GMT on Monday 9 January.

The public vote will be combined with those of a panel of football experts to decide the winner, who will be announced next week.

Casemiro (MUN)
P4 W3 D0 L1 G0 A1
The Brazilian was a rock at the base of Manchester United‘s midfield, helping them to wins over Fulham, Nottingham Forest and Wolverhampton Wanderers. Casemiro also produced an assist.

Erling Haaland (MCI)
P4 W2 D1 L1 G4 A0
The Manchester City star’s four goals were the most by any Premier League player across November and December. He netted a stoppage-time winner against Fulham, and broke a record by becoming the fastest player to reach 20 Premier League goals with a brace at Leeds United. He also scored against Everton.

Ben Mee (BRE)
P4 W2 D2 L0 G0 A1 CS1
The Brentford centre-back helped the club to some outstanding results as they claimed a stunning 2-1 win at Man City, beat London rivals West Ham United and claimed a draw against Tottenham Hotspur, climbing into the top half.

Martin Odegaard (ARS)
P4 W4 D0 L0 G3 A3
Arsenal‘s captain led by example to help his side gain a seven-point advantage at the top of the table. Odegaard produced three goals and three assists during November and December, the most goal involvements by any Premier League player across this period.

Joao Palhinha (FUL)
P4 W2 D0 L2 G1 A0
Central-midfielder Palhinha produced authoritative displays in Fulham‘s four matches, including a 3-0 success at Crystal Palace. He scored a late winner as the Cottagers finished 2022 with a victory over Southampton.

Marcus Rashford (MUN)
P4 W3 D0 L1 G2 A1
The Man Utd star continued his excellent form from the FIFA World Cup 2022, scoring one and making another in the 3-0 victory against Forest, and hitting the winner against Wolves.

Bukayo Saka (ARS)
P4 W4 D0 L0 G2 A1
The 21-year-old scored pivotal goals in Arsenal’s pursuit of the title, netting the equaliser in a 3-1 win against West Ham, and scoring the opener in the 4-2 win at Brighton & Hove Albion. He also set up the only goal in a victory at Chelsea.

Also in this series

Part 2: Vote for your Barclays Manager of the Month
Part 3: Select your Budweiser Goal of the Month