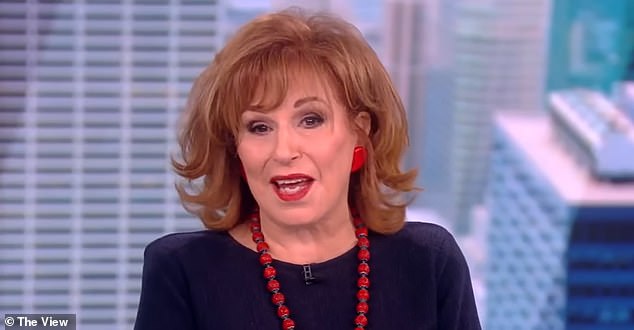 By Neirin Gray Desai and Stephen M. Lepore For Dailymail.Com

The View co-host Joy Behar trashed conservatives and heterosexual men for pushing tackle football in schools in the wake of the shocking Damar Hamlin collapse on Monday Night Football.

Her comments come after Buffalo Bills player Damar Hamlin suffered a cardiac arrest on the field on Monday night and was left in critical condition.

Behar said that she had discovered a poll where 45 percent of Americans – most positively heterosexual men and conservatives – said they felt tackle football was appropriate for children, adding ‘just saying.’

The long-time liberal host then derisively suggested kids try golf or tennis instead.

Co-host Sara Haines somewhat defended the sport, saying it was a ‘huge part of tradition’ in America and that she’d grown up, as many Americans had, going to football games all the time.

‘I grew up, and football was just the norm,’ Haines said. ‘My parents went to the games long after we were even in high school because the whole town did. I loved ‘Friday Night Lights,’ et cetera, et cetera. What it might change is people that have kids coming up because like me, you even wouldn’t have known all the damage that could be done now.’

Sunny Hostin then chimed in, saying her son had quit the sport after a hamstring injury and learning of the risks of CTE – Chronic traumatic encephalopathy – a neurodegenerative disease often associated with high-contact sports.

‘I think a lot of mothers certainly feel that way and have felt that way for a long time, but it’s – the way my son describes it is, it’s a family. It’s a bonding experience that he had never had before,’ she added.

Behar and The View are the latest left-leaning talkers to criticize the country’s most popular sporting concern.

MSNBC presenter Joy Reid attacked the NFL on Tuesday – calling it a brutal ‘modern-day gladiator spectacle’ in which a lack of care is shown for the wellbeing of players.

‘It’s yet another tragic reminder of the inherent violence of the sport and the humanity of the young men who put their health and safety on the line for the NFL’s modern-day gladiator spectacle.’

Hamlin collapses, falling backwards and laying motionless on the floor

The rare injury occurs when something makes contact with the chest wall precisely when the heart’s lower chambers start to refill with blood. The impact then causes a rapid and disorganized contraction of the heart’s lower chambers, preventing the heart from getting blood to the rest of the body. The window for this to happen is just 20 milliseconds, making commotio cordis incredibly rare. Just 30 people a year suffer the injury worldwide and only around 200 cases have been reported among Americans. It has previously been noted in young baseball or hockey players who receive a blow from a baseball or hockey puck to the center of their chests

The NFL took around an hour once Hamlin collapsed to officially suspend the game as league executives were gathering information and communicating with the referee, coaches, and the NFL Players Association.

Hamlin suffered a cardiac arrest on the field on Monday night and was resuscitated by medics, but updates have been positive in the days since, with his ventilator usage reduced from 100 percent to 50 percent late on Tuesday.

Hamlin collapsed following a collision with Cincinnati Bengals receiver Tee Higgins and was rushed to hospital after receiving emergency medical treatment at the stadium.

Doctors believe the blow to the star’s chest threw his heart’s pumping mechanism out of rhythm, disrupting blood flow around his body and shutting off his brain.

Experts speculate this may have happened during a vulnerable moment in the heart’s electrical cycle, triggering a condition called ‘commotio cordis’.

The criticism of the league comes as fans have called for the NFL to revise its rules around uniforms in the days since the accident, arguing players are able to use the hard body armor as a weapon.