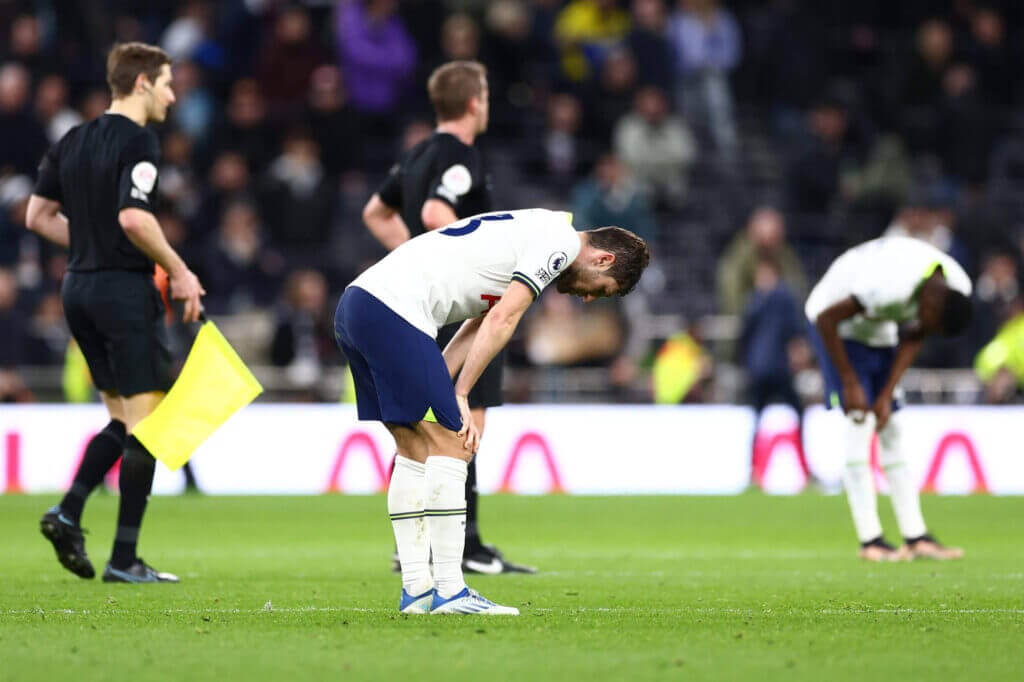 Some guy once said that the definition of madness was doing the same thing over and over again and expecting different results.

Tottenham Hotspur have conceded the first goal in 10 straight matches in all competitions.

They have allowed two goals in six of their past seven Premier League games (and three in the other one).

They have only led at half-time in two of their last 18 outings in all competitions.

What makes these statistics more maddening from a Spurs/Antonio Conte viewpoint is that they are a team much better suited to being in front. Until recent months, they were a side built on solid defensive foundations — they ended last season having conceded just five times in 11 games as they surged above arch-rivals Arsenal to claim the Premier League’s final Champions League place.

They were built on a rigid 3-4-3 formation that lent itself to counter-attacking football via wing-backs but predominantly via Harry Kane, Son Heung-min and to a lesser extent Lucas Moura careering forward and exploiting space in behind, often latching onto through balls from the creative toes of Dejan Kulusevski.

A basic and substantial barrier to playing this way is that if you concede the first goal, the opposition can sit deeper and soak up pressure, forcing you to try to play your way through a lower block.

The pattern of play in Tottenham matches has been extremely familiar for what feels like an age, to the extent it’s a running joke that fans may as well only turn up a half-time, as that’s when their team start playing.

Spurs will probably start off pretty cautiously, have a defensive wobble or two — Eric Dier has been responsible for a few, hence why he was dropped against Aston Villa on New Year’s Day just a couple of months after his imperious form earned him an England recall — then concede before half-time, then maybe let in another after half-time, before belatedly rousing themselves for a grandstand finish.

Those comebacks (from 1-0 down to win at Marseille to reach the Champions League last 16; from 3-2 down against Leeds to win 4-3; from 2-0 down at Bournemouth to win 3-2; as well as from 2-0 at Brentford to earn a point, a good result given the teams Thomas Frank’s side have beaten this season) have been as impressive as the inevitable slumps into those early losing positions have been desperately and predictably poor.

Against Villa the other day, the usual start wasn’t followed by a spirited comeback. That lack of a rally brought boos for the players, sarcastic cheers for a Conte substitution, and even some anti-Daniel Levy chants.

Those comebacks had masked plenty of underlying anger and frustration over what’s felt like an underwhelming season, even if when the World Cup break came Spurs were fourth domestically and still in the Champions League. For long passages of the majority of games, they haven’t been playing cohesive, let alone attractive and free-flowing, football.

While a hectic schedule and a truncated campaign (plus some unfortunate injuries, particularly Kulusevski and Richarlison, as well as Son’s awful form) are reasonable excuses for a lack of consistency, there’s rightly a focus on how Conte, whose achievements as a coach rightly place him in the top bracket of European managers, is setting his team up. Why can’t he crack this particular code? And where are he and Spurs going wrong?

One thing he hasn’t tried yet — and given how he’s set up title-winning teams at Chelsea and Inter Milan in recent years, it’s no surprise — is a different formation. It’s been three at the back every single time.

There are weaknesses in the team and the squad that have become pretty apparent during Conte’s 14-month tenure, not least at wing-back where, despite the introduction of the experienced Ivan Perisic in the summer (he has four league assists and is a prolific route to goal via his set-piece deliveries) there is a distinct lack of attacking end-product in open play from the four (Perisic, Ryan Sessegnon, Matt Doherty and Emerson Royal) at his disposal.

Djed Spence, he of the sporadic 88th-minute introductions, doesn’t yet count.

Spurs are probably also short of at least one commanding centre-half, a creative midfielder and another forward.

So why can’t Conte get his team to put together a 90-minute performance?

Looking at the data, there are some clear discrepancies between how they are starting matches and how they’re finishing them. A lot of this is to do with game state, but there are certainly some facets of their play that can be improved in the early stages of a match.

Spurs’ style is more suited to transitional play, but at the point they score many of their goals this season, their wing-backs are high up the field and wide, while their central midfielders (usually Pierre-Emile Hojbjerg and Rodrigo Bentancur, who are having either the best or joint-best goalscoring seasons of their careers already) attack the box. Getting these players upfield helps win more set pieces in attacking areas, which is a big Tottenham strength — 12 of their goals (the joint-highest in the league with Fulham) have come via set pieces.

They also love swinging the ball into the box from open play, producing 269 crosses, a league high (more than double the amount compared to Wednesday’s opponents Crystal Palace, who are on 120), either for Kane or the far wing-back to attack, while Hojbjerg and Bentancur are often there for rebounds around the edge of the box.

These tactics, in theory, should pin the opposition back as Spurs work to score the first goal of the game then play to their biggest strengths (a lower block and counter-attacks).

Part of it may be related to mentality (they know they’re capable of coming from behind, having earned 14 points from losing positions, a league high, plus another seven in the Champions League) and part of it may be related to conserving energy for later in games. When questioned about those lacklustre first halves before the win over Marseille in November, Conte’s assistant Cristian Stellini said: “We are playing a lot and sometimes you have to manage the energy.”

Comparing data from when Tottenham are drawing to when they’re losing, things such as the intensity with which they press, how many long balls and crosses they play, how quickly they get the ball upfield, how direct their attacks are, and how many chances they create all go up when they are behind in matches.

The split between their first and second halves is remarkable.

Spurs are the best second-half team in the Premier League with 11 wins, two draws and four losses (23 goals scored, 12 against), but the 11th-best team in the first half, with just five wins, six draws, six losses, 10 goals scored and 13 conceded. They are essentially two different teams.

Interestingly, their field tilt — which is their share of the total number of final-third passes in the game — goes down when they are behind, which means they aren’t keeping the ball deep in opposition halves of the pitch a huge amount, but are perhaps having more build-up play in deeper areas while opponents sit off.

“We start not well in the first half,” Stellini said after that Marseille match. “We didn’t use power or intensity and let them play too much in our half and lose the pitch and let them have control of the game.”

They know it’s happening, they don’t like it, but right now they seem powerless to stop it.

Conte’s solution, at least from what he concedes during press conferences, is time, patience and giving him better players than he’s got.

He largely plays dumb when asked about the first-half/second-half conundrum, only calling for more aggression in duels from the word go and for his team to show the character they do during comebacks from minute one instead of minute 70.

He was keen to remind the media on Tuesday that everyone has been saying this season would be strange and unique because of the six-week pre-Christmas break for the playing of a winter World Cup.

“This is a situation many, many coaches didn’t want to face,” he said. “At the start of the season we said, ‘This season will be really strange for everybody, we won’t know what will happen, blah blah’. And that’s true. The problem is people have already forgotten. This season will be strange — a really difficult season for everyone, not just us.”

He insists he’s happy at Spurs and that if he accepts the limitations of the job, such as not fighting for the top titles and being unable to compete financially with many of Europe’s big clubs, he’ll stay. Those limitations include the players at his disposal. Not having his preferred ones at the moment means his tried and tested formulas aren’t working.